I have been training at Golden State TKD for over 18 years and am currently a 2nd degree black belt. Of those years, more than 12 have included teaching and coaching students of varying skill and age levels.

As an instructor, I have experience leading both classes and private lessons. I also enjoy coaching students when they compete in forms or sparring in tournaments. I competed on Golden State TKD’s tournament team from 2004-2010 and received over 50 national and world level wins in Sport Karate, as well as an induction into the National Blackbelt League’s Hall of Fame. In addition to TKD, I also have experience in boxing and have competed at the national collegiate level.

Teaching Goal
My goal as an instructor is to help students on their journey to becoming a better version of themselves inside and outside the TKD studio. My proudest achievements in my TKD career have been seeing the growth of my students, not only in training, but also in their lives. 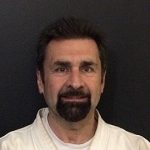 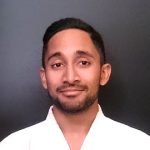